This time round, my new weekly habit of delving into horror territory is going to be uncommonly fresh in the fact that I have just about finished watching “Sinister”, and I have to admit that apart from a handful of pretty predictable scares, this film was… really creepy.

To whoever thought that “Sinister” was a terrible film and bashed it thoroughly in their reviews I can only say the following: go and do what I just did – watch it alone in the bloody dark. I understand that when you watch horrors with friends, or in the cinema, the experience might not be the same, the reason being that “Sinister” as a horror does not rely on jump scares at all to get inside your head. The scares are still there (and maybe one of them is actually crafty), but the reason it was so effective lies completely elsewhere. 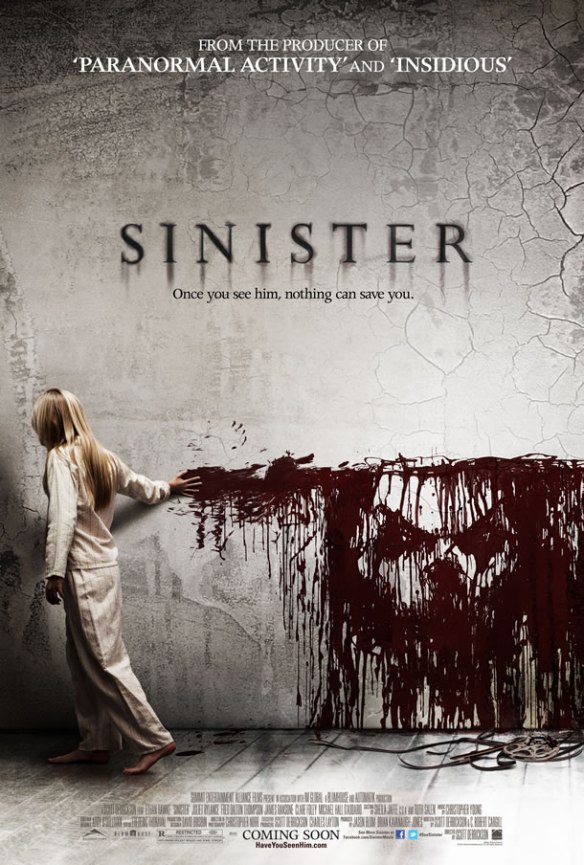 “Sinister” starts of as your bog standard ghost story would, with the Oswalts, a family of four, moving into a new house. But it’s not just a regular house (of course), as we learn early on that Ellison Oswalt (Ethan Hawke) has chosen this place for his family to move into with a very particular reason in mind. It turns out that the family that used to live there before them was brutally murdered in the back yard in very mysterious circumstances. You see, Ellison is a semi-successful true crime writer hoping for his big break and he thinks that trying to solve this mystery would just be it. He quickly learns that what happened to that murdered family was not exactly normal, as he uncovers a box of Super8 films in the attic that seem to contain really disturbing footage of multiple families being slaughtered. Ellison’s investigation into whether these events are somehow linked (as well as the possible nature of said link) puts a really creepy set of events in motion and as a result no-one in his household can feel really safe…

If you look for any review of that film, you’ll immediately learn that it is supposed to be a found footage horror. Well, it isn’t… Or it is, depending on how you look at things, because Ethan Hawke’s character actually finds footage that is crucial to the plot development. Plus, the contents of the Super8 films set the disturbing, creepy tone to the whole film and provide the overwhelming sense of threat. But if you’re thinking about the ‘found footage’ subgenre of horror, you’d be gravely disappointed here. Apart from the Super8 thingy, “Sinister” is more of a variation on a haunted house story. It has all the usual devices a ghost story would consist of, with traversing the house in complete darkness, spooky children, attic-related jump scares, creepy noises and so forth. However, if you’re a seasoned horror veteran, you’ll be able to pinpoint the ‘scary’ moments precisely, which somewhat diminishes the net effect.

The scares are nicely placed and they work very well with the pacing of the film, so that “Sinister” doesn’t suffer from the fear fatigue of most recent horrors, like “Mama”, or “Insidious”. At no point during the projection I could say I was comfortable with what I was seeing, because the story is paced in such a way, that the suspense is kept at a steady level all throughout. There’s no ramp-up, no crescendos that make the viewer completely immune to the scares in the final act (which is more disturbing than scary in its own right), so all I can say is that “Sinister” does its job rather well.

One of the ways one can find to create a good horror story is to tap into our primal fears. And what is it that we fear the most? I’d say that ‘the unknown’ would be high on a list like that and the creator of “Sinister” (Scott Derrickson, both director and writer on the project) has found a nifty way to bring those fears to life. While I didn’t care for the jump scares all that much (they weren’t too creative, or at least most of them weren’t; and most of them were featured in the trailer anyway), it was the grainy Super 8 footage with creepy images and blurry details that really set the wheels in motion for me. Even when we’re eventually informed (as usual, there has to be someone proficient in the subject that will shed some light on the nature of what is going on) “Sinister” retains the sense of unnamed supernatural threat slowly but surely creeping onto our protagonists. Therefore, I think it’s vital for anybody who wants to enjoy this film to dim the lights, cut the chatter and immerse in the story – it really makes a difference this time.